Prefab Housing: Can That Be All? 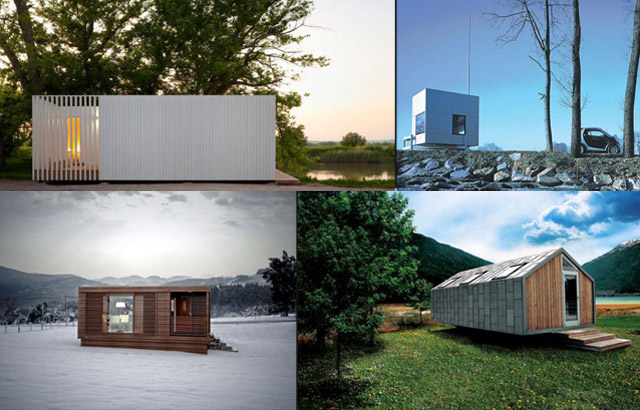 Modular living, the upgraded wording for prefabricated homes, seems to be on the spotlight. Small and sexy homes have started popping up in stunning locations, looking so incredibly cool that in relatively no time they have become the ultimate object of desire. But what would happen if this were to become a trend?


The success of these houses hasn’t caught anyone by surprise: the soaring home prices, the continuing barriers to access financing and the disappearing of the nuclear family have contributed to rethink the traditional living model and to look at alternatives. The early adopters, a breed of professionals looking for exciting living, thank the possibilities offered by the new information technologies and argue that without the facilities given by employers regarding working by home, living remotely wouldn’t be a reality.

In this context, imagine a house that costs a little more than a car, it is delivered in a few weeks, doesn’t require planning permission, adapts to the owners changing needs, has a beautiful design and can be placed anywhere you like. Sounds like the housing world could be on your side again. If the house then comes with the added bonus of being completely independent in terms of services your options of where to live become incommensurable.

Architects have done their homework, teamed up with manufacturers and come up with an interesting range of products. There is a prefab home for every taste and budget.

But what would happen if this concept of "affordable living anywhere you want" became so successful that it turned to be the rule for housing rather than the exception? According to the IPPR (Institute for Public Policy Research) the UK will face an estimated home shortage of 750,000 by 2025. Imagine for a moment that every citizen in need of a house would buy or lease such a planning-permit-free-home and in line with their acquired rights, would place it anywhere she or he would like to: urban holes, green field sites, roof tops of existing buildings etc. How many of these homes could a rural landscape take and still preserve its beauty? What would happen to the urban fabric? Would we still want to go to nature to relax if it was full of small manmade structures?

An extreme example of this can be witnessed in post-disaster Haiti where many temporary homes (mainly tents) have been placed out of towns creating new settlements following no particular planning other than being efficiently aligned in rows. The emergency of the situation and the temporary nature of the shelters have in this case justified the lack of planning. We do know however that although the term “temporary” implies either an upgrade or demolition followed by new construction, in reality it doesn’t mean more than an option rarely executed. Temporary becomes permanent in a short time. An informal settlement turns into a town sooner than we think it would. And if planning has been neglected or omitted, the town hardly catches up at a later stage. The new town becomes an unsustainable place where distances are big, communal transport and infrastructure inexistent and working opportunities rare.

The lesson to be learnt from the emergency tented camps is that no matter how temporary a structure is, a few serious thoughts have to be given about its context. A mere matter of volume: one single structure randomly placed is no issue, 20,000 are. So how shall temporary structures be organised and where?

Before answering this it is worth revisiting what temporary living may mean nowadays. Is a nomadic lifestyle still desirable? Long time ago there wasn’t an alternative: populations had to move around to protect themselves from enemies and to guarantee their food supply. There are still some communities that move around following their livestock or hunting such as the Tuaregs in the Sahara, the Eskimos and certain populations in Central Asia. Other XXI century nomads include the so-called Gypsetters, upmarket neo-hippies in search for creative travel experiences in remote parts of the world. The term was invented by American reporter Julia Chaplin (gypsy + jet-set) and refers to artists, fashion designers, photographers, musicians and surfers, “whose work is based on and reflected in their lifestyle and whose lifestyle is based on and reflected in their work”. Although Gypsetters spend time in remote locations, their activity is still bound to major cities.

With the exception of these communities, the rest of the population moving around in search of work opportunities or escaping disasters, aim for a settled life. At least for the whole duration of the period they spend being displaced, emigrants or expats. With this in mind, a home may be temporary but it has to be in a permanent context. And since cities are the engine of economic growth, this permanent context is an urban one.

How can prefabricated homes be part of the urban context? We can think of two ways: by retro-fitting in an existing fabric and by urbanising afresh. Retro-fitting would seek to fill the urban gaps, derelict spaces and even building roofs with the new prefabricated structures. These structures would plug into the existing fabric at designated locations that have been identified to cope with the increased population: larger roads, vicinity of railway stations etc.

Urbanizing afresh would mean gathering a number of prefabricated homes and arrange them according to a masterplan. In order to avoid past urban mistakes - such as urban sprawl, congested streets and polluted air - the community would need to be compact. Compact communities are walkable and reduce the need of a car.  When we think of prefabricated homes we have in mind a single detached home. But prefabricated homes can also be high-rise. A compact city would be made out of high-rise buildings, possibly four or five stories high.

Prefabricated, high-rise, compact living, delivered at a low price and in very short time. Isn't this the real challenge?

Article published under the title: