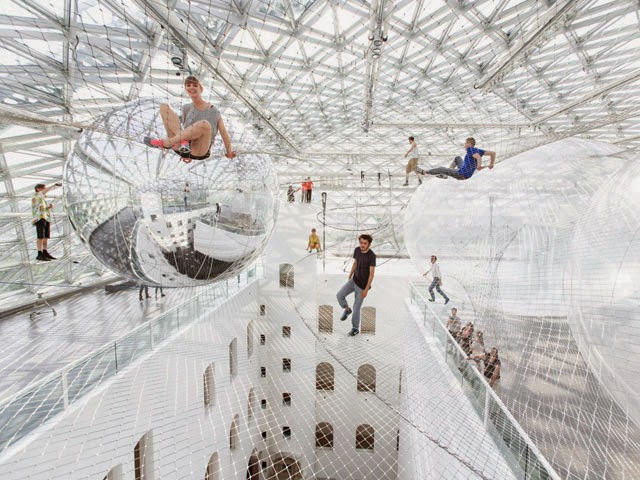 Tomás Saraceno's floating spaces are growing in scale and impact. Wonderful this spider web at the K21 Ständehaus in Düsseldorf on show till next year and his cloud cities project.

Tomás Saraceno seems to have found in the art world the experimental ground that architecture fails to provide. A trained architect born in Argentina and living in Germany, Tomás has been imagining bubbles, cloud cities and other fluid spaces for quite some time. His understanding of "space" gives an insight to his work:


"What space is? I don't know... A pure negotiation between people? Space is something we can share. It is continuously invented and reinvented by the way we relate and interact to each other. Space is undefined; the collaboration between people creates it. The audience is important, they make the piece..."

In Orbit  is a lightweight structure conceived for the Kunstsammlung Nordrhein-Westfalen, K21 Ständehaus, in Germany. It spans 25 meters above a covered courtyard and consists of 3 levels of steel wire mesh that are kept apart with huge inflated balls. The visitors can move freely on all 3 levels, floating like spiders.

Other works by Saraceno include Cloud City, 16 stainless steel modules linked together with acrylic floors for the Metropolitan Museum in NYC and an inflated walkable roof at the Hangar Bicocca in Milan.


Another great project Tomás was involved in is The Cloud, a proposal for the Olympic Park in London done in collaboration with the MIT Senseable City Lab that sadly lost against Kapoor's Arcelor Mittal Orbit Tower.

Everything we can think off, can be. So, if Saraceno has clouds in his mind, sooner or later we'll all experience the sky.