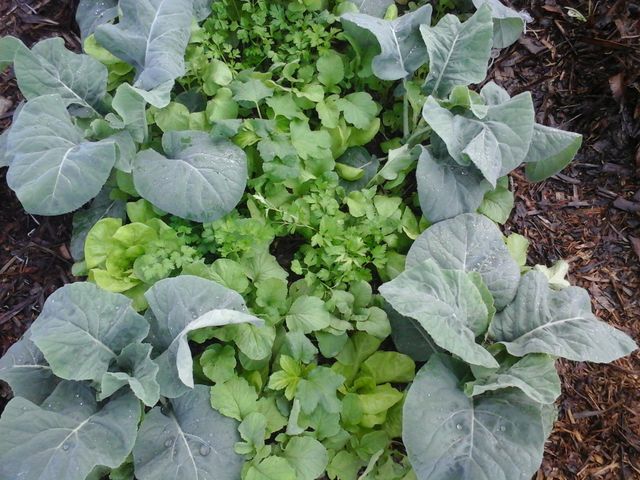 "There is no such thing as a poor soil," stretches Ernst Götsch, a farmer and researcher who for the past 30 years has turned degraded land in Brazil into highly productive agroforests (trees and crops) using no chemical inputs, heavy machinery or irrigation.

Since Götsch hardly publishes papers, I have traveled to Brazil to learn first hand how he manages to create net positive ecosystems, that produce food, while restoring soils and trapping outstanding amounts of carbon. As it happens, his method is nature-inspired, intuitive and easy to understand; it carries almost no cost and works in all ecosystems. If we were to leave it to nature to fix climate change and food security, this is how she would do it.

Why does the subject matter
Feeding the world releases 17,000 megatonnes of carbon dioxide into the atmosphere annually (source) - 47% of the total global emissions - and still leaves 795 million people - 10% of the global population - chronically malnourished. The Sustainable Development Goals 2, End Hunger, and 13, Climate Action, are an inspiring call on how we can help, yet a complete rethink on how we produce food is desperately needed.

Another important aspect relates to how and where we will live in future. Despite projections that foresee 70% of the world population living in urban areas by 2050 (source), most likely the opposite scenario - a migration to the countryside - will be true considering the factors below.


But we may also be pushed towards rural living, if the commitment to limit the temperature increase by 2100 to 2ºC adopted at the COP21 gets implemented. According to the Committee on Climate Change to achieve this goal the global emissions should peak at 2020 and be halved (or more) by 2050, which means per capita CO2 emissions in 2050 averaging around 2 tonnes. This is a reduction of 72% relative to today 7.3 t CO2e/capita. Mission (or rather emission) impossible unless we radically change the way we live.

According to a study from the Federal University of Ceará in Brazil, bigger cities produce more carbon dioxide per capita than small ones. "This shouldn't be a surprise," says the research team, "there are many aspects of cities that scale with population size, such as the number of jobs, houses and water consumption."

In light of this, if we were to plan the most carbon-efficient community, it ought to be on the smaller size. But how dense should it be? Here is where agroforests enter the picture.

If a community were to integrate an agroforestry system, it could offset part of their CO2 emissions with the CO2 sequestered by its plants. According to Cooperafloresta Brazil (see picture below) agroforests sequester approximately 10 tonnes of CO2 per hectare per year: 6.6 tCO2/ha/yr from the air and 3.5 tCO2/ha/yr through pruning. If the per capita emission today is 7,3 t CO2 and the number is smaller in smaller towns, we could assume a possible per capita CO2 emission in a small town of 4 tonnes. Since our emissions allowance will be 2 t CO2e/capita, we'd need to offset the other 2 tonnes. The 10 tCO2/ha/yr sequestered by an agroforest is equivalent to the CO2 produced by 5 people/ha (or 500 people/km2) at 2 t CO2e/capita. To conclude: a small town with a density of 500 people/km2 will meet the 2050 climate action targets by means of incorporating agroforestry, without their inhabitants having to shift customs or behaviour.

Needless to say, however, that the behavioural change will in any case occur through the practice of agroforestry: people would consume organic, locally produced food which will further reduce their carbon footprint (agroforestry produces 40 tonnes of food per hectare per year!). Agroforestry practised in small, sparsely-populated communities would be a way to meet the climate targets and could lead to carbon neutral (or carbon positive) living.

This surely sounds like heresy to urban planners, since it looks like a return to "urban sprawl", the phenomenon we've been fighting for the past 25 years. But it won't be comparable since 1) the conditions are very different: people will work locally and/or remotely, consume less, travel less etc, 2) compact cities will still exist, and 3) "urban density" is like "fiscal austerity", in theory a good idea but in practice not really taking us where we want to be.


Syntropic agriculture and the work of Ernst Götsch

The eyeopener for Ernst Götsch (Switzerland 1948) was a trip to the tropics in 1976 when he was stunned by the contrast between the poverty of cultivated lands and the wealth of the bordering tropical rainforest (1). He found similar wealth resulting from the way small farmers worldwide had been practising agriculture for over thousand years. They would combine trees with crops and/or pastures (agroforestry) to achieve an increase in biodiversity and an improvement of soil fertility, thus leading to a higher productivity. Exactly the opposite than conventional agriculture achieves with monocultures and the use of herbicides, pesticides and mineral fertilisers.

Taking agroforestry as a base line, Götsch developed by means of trial and error a system called regenerative analog agroforestry, known in Brazil for its acronym SAFRA. This method works with processes rather than inputs and supplements agroforestry with strategic interventions (see below) and the natural succession of species in a system. This, according to Götsch, is what ultimately brings a system to thrive and not the initial quality of the soil or the amount of light it receives (2). He observed that the natural succession of species is one of the driving forces of life.

Götsch's research and work keeps unfolding and he now refers to it as syntropic agriculture since it actually follows the law of syntropy (3), also known as negative entropy, or the principles that sustain life. He also defines his work as "a way to create a positive energy balance in the world by means of unconditional love and cooperation."

His numbers are as impressive as his methodology. He produces in his farm in Bahia cacao beans so superior in quality, that they sell for four times the market price to Italian Amedei, the best chocolate producer in the world according to the London Academy of Chocolate, says an article in O Globo Rural this month (4). "The quality arrives with the ecological balance of the system", Götsch tells in the article. Since his method requires no inputs, Götsch produces his cacao at zero cost. He also achieves higher than average yields and his crops are unaffected by pests.

His best numbers though are in his comparison of the energy efficiency of nature and technology:

"Nature uses for its metabolic processes approx 3% of its capital in order to achieve a 10 to 15% surplus." This means, nature (green line above) will always increase its energy (syntropy) since it produces more than it consumes. Technology on the contrary will always tend towards energy depletion since to achieve the same surplus of 10%, a combustion engine, for instance, burns between 70-75% of its fuel energy, that is, it consumes more than it produces and will always need energy added to its system (entropy). Technology will never lead to abundance, nature will.

Götsch's syntropic agriculture mimics nature: it produces its own fertiliser, creates abundant black soil and nutrients, retains water and optimizes its circulation. Notwithstanding the complexity of the system that requires in-depth knowledge of the local flora, Götsch believes that everyone can be a practitioner and encourages to focus on understanding the processes rather than on the details. His advice: to experiment with the species and to keep an open heart for new knowledge to flow in.

#1 Permanent soil cover
In agroforestry the ground is covered throughout with organic matter obtained from weeding, pruning and removing plants. This material placed on the ground as mulch (chipped or unprocessed) both enriches and protects the soil. "Efforts are made to recycle and to increase the amount of organic material produced by the plantation itself" (2) thus making away with the need for external fertilisers.

An agroforestry site has on average 4kg of dry organic matter per m2, constantly decomposing. This equals to an estimated production of 6-10 kg of mulch /m2/yr with more than 3 to 5 prunings (5). The mulch fixes carbon dioxide to the ground, protects the soil from erosion and preserves water (some vegetable beds hadn't been watered for a month and a half).


#2 Pruning
The drastic trimming of branches and trunks done on a regular basis is an important part of syntropic agriculture. Besides producing the dead material for the permanent soil cover, strategic pruning rejuvenates maturing plants and accelerates the rate of growth in the whole system by increasing the amount of light and nutrients available to the future generations of plants. It also speeds and directs the organic process of (plants) succession.

Through pruning the carbon trapped in the trees goes back to the soil. A mature agroforest (10-15 years old) has a carbon stock of 48 t/ha (source).

#3 Companion planting
"Living beings of each place and in each situation form consortia in which each member contributes with its particular capacity to improve and to optimize its conditions as well as those of the members of its consortium to grow, prosper and reproduce." (2)

"It appears that the critical factor in determining health and growth rate of the plants, as well as the productivity rate of the system, is not the initial quality of the soil, but rather the composition and density of individuals of the plant community." (2)

Götsch creates consortia of crop species with synergetic potentials that cooperate with each other. Maize, for instance, produces more when planted with beans or grass (brachiaria brizantha); bananas grow healthier with orange trees, pineapple with manioc.

Despite the complexity of syntropic agriculture consortia, for the purpose of this workshop, we experimented with simple ones. We planted 3 to 5 crops, known to thrive together, like tomato, maize and green beans; maize, pumpkin and rucola; passion fruit, tomato, cucumber and chayote (chuchú).


#4 Adoption of successional elements
"Each consortium creates the conditions for a new consortium with a different composition. Hence, each consortium is determined by the preceding one and will determine the following one. The different consortia succeed one another in a dynamic, ongoing process called natural species succession." (2)


"The order in which crops are planted is important, as most species only grow vigorously if they enter the flow of species succession in such a way that they come to dominate and to thrive in the system." (1)  Equally critical for the establishment and development of a plant is the timing of when it appears.


The sowing layout #1 (pictured above) paves the way for trees, in this case açai and cacao, to enter the system at a later stage. Tree marigold, a bush and a pioneer specie, is the first to grow (quickly and abundantly). In 6 to 8 months it will be drastically cut, its organic matter left on the floor. Same will happen with the banana trees and the vegetable plants after their harvest in the same period of time. The açai and cacao seeds will then be planted in lieu of the ginger. This secondary system is expected to grow beautifully.

There are many other strategies included in the practice of syntropic agriculture and some bombshells. "Eucalyptus promotes food production", says Götsch challenging the belief that it depletes the soil. "It produces gibberellic acid, which makes eucalyptus leafs a top quality mulch, and its roots bring water to the system rather than sequestering it."

Pests are nonexistent in syntropic agriculture. Apparently pests go to weak plants and are therefore to be seen as an indicator of the plant's health rather than a threat. The way out is to address the plant's health by strengthening it. Pests then disappear naturally. Nothing to do though against birds eating crops. "That's life," says Götsch.

Syntropic agriculture works in temperate climates too. This is the way our ancestors did things. Just take apples for açai and start the journey.