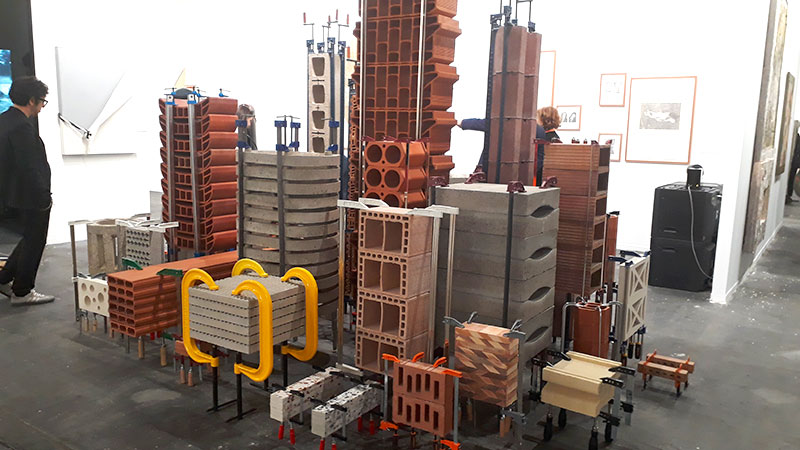 Here goes again my favourite event in Madrid,  the ARCO Contemporary Art Fair. The beauty of it is that it never disappoints. Loads of good art, plenty of new works and a format that gets simpler by the year. Although this sounds like great news, the fair is still too big to visit comfortably in a day, and one inevitably starts to skip galleries as exhaustion kicks in.

This 38th edition hosts a total of 203 galleries from 31 countries, with nearly half of the galleries being Spanish and Latin American. Some galleries have joined this year the initiative of presenting one or two artists only, which I guess is part of an effort by the organisation to make the visit more user friendly.

Peru has a special place this year as guest country. "Peru at ARCO" shows the works of 24 Peruvian artists, selected by the curator of the Lima Art Museum, and represented by galleries from different countries. The selection of artists, many of whom have developed a good part of their career in other countries, wants to draw attention to the importance of the artist above geographical limitations. The Peru programme at ARCO is supported by a major deployment of Peruvian culture throughout town, and it includes an exhibition on the pre-Columbian Nasca culture and contemporary Amazonian art.

In terms of content, there is an apparent shift from photography to handicraft and sculpture. Paintings seem to be in short supply.

Two artists that stand out for me and are known for their interesting work on gender activism are Alicia Framis (Spanish living in Amsterdam) and Teresa Margollés (Mexican living between Mexico City, Madrid and Berlin). Framis' work in Arco, a female manikin laying under a carpet of scouring pads (left picture above), draws attention to whatever isn't right with women, kitchen work and the invisibility of it.

There were some works at ARCO that although displayed as art, could easily be a wonderful contribution to urban design and urban planning. Argentinian artist Pablo Reinoso displays a beautiful one-person bench (pictured below), that makes you reflect on the fact that urban furniture is still designed to last century's behaviours, such as interacting with strangers on the public realm, something we hardly do today. Instead, his solo bench fits beautifully to the current use of public seating which is a place to interact, undisturbed, with a phone.

The Ponce & Robles gallery and Renfe - the national railway company - present a very interesting project that compares the different uses of street art with two examples. One example is about the destructing effects of unsolicited graffiti and shows a train door, completely covered by graffiti, titled "the more expensive artwork" (#LaObraMasCara). The "artwork" carries a price tag of 15 million euros - Renfe's yearly expenditure on clearing graffiti off trains - and explains how painting trains besides being expensive, also poses a health hazard for commuters, since it is done while the train is running.

The other example shows the positive effects of planned street art with a project by Boa Mistura, a group of Madrid urban artists who use art to improve communities. At the show they have recreated a piece of a project in La Habana that shows a verse of a poem by Cuban Samuel Feijoo painted on a shack wall. The project takes all 25 verses of Feijoo's poem and paints them on the walls of different locations in a same neighbourhood. The verses cannot be understood separately but in a group, and "serve to connect people with invisible links".


There were more examples of art meeting architecture.


A pile of books supporting a wall is Alicia Martin's proposal for El País stand, that she shares with Peruvian artist Fernando Bryce. Martin has shared in an interview her intention not to provide a theoretical reflection but rather a visual impact that would then lead to a reflection.

Some of the paintings and prints.

Lovely the woven work of Ana Teresa Barboza at the Peru space and great to see the work of Jorge Piqueras, a prolific and energetic Peruvian artists in his 90s with whom I had the honor to work two decades ago in Paris. Back then, Jorge was engaged to develop a public art proposal for an architectural project I was working on and his energy is something I still recall today. Extraordinarily optimistic and fun, he would need little sleep and work a lot. Until today, I hadn't had the chance to see his work live.

Lovely to see there was room for activism as well. Interesting the way RedCSur, an Argentinian platform, has chosen to raise awareness about the  privatisation of an artist's work: some 40 people in a line reading their complain in various locations of the fair.  There was also some expected controversy around a giant sculpture of the king, that did actually not happen. The sculpture is a bonfire papier-mâché figure that is sold with the condition that it gets burned within a year.