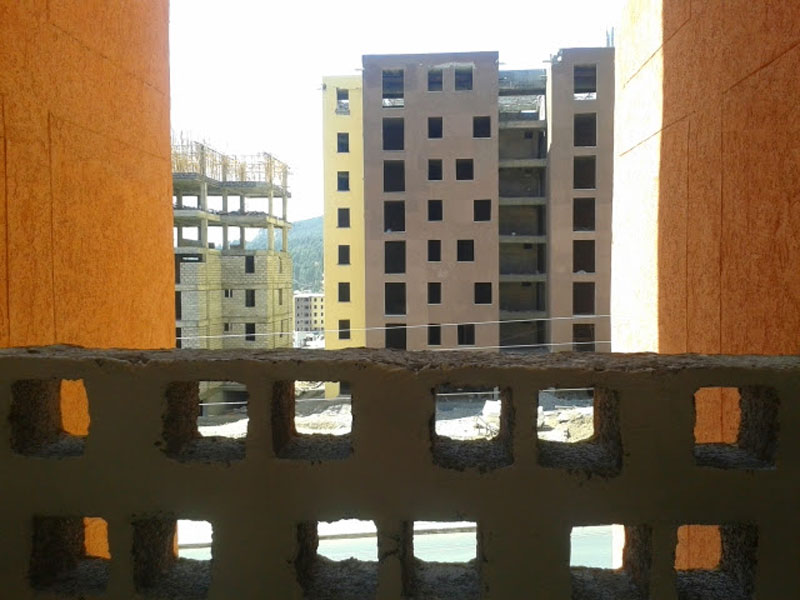 Ethiopia is urbanizing at the phenomenal annual rate of 4.3%. Cities like Addis are seeing this trend in the shape of large, multi-storey condominium developments primarily for the low- and middle-income sector. Last February, while in Addis for a housing consultation workshop convened by the African Development Bank, I visited with the AfDB delegation Yeka Abado, a new development east of the city centre where 18,000 homes are nearing completion. The 200 hectare site is part of the city’s ambitious Housing Development Programme that includes ten similar sites all under construction.

Addis Ababa is, with a population of 3.5 million, Ethiopia’s largest city. Located 2,400 meters above sea level, it suffers from a shortage of housing but mainly from poor quality homes whereby “80% of Addis’ inner-city houses need complete replacement because of dilapidation”, says economist Azeb Kelemework. The majority of low-income households live in rented accommodation and almost a million people have registered for the new housing schemes.
The Housing Development Programme is the second phase of the ambitious Integrated Housing Development Programme (IHDP Phase1) that between 2006 and 2010, and with the target of building 400,000 homes, aimed not only to reduce the shortage of houses and create jobs, but also to encourage a saving culture and reduce by 2020 slum areas by half.
The IHDP-Phase1 fell short of its goals and to overcome its limitations, such as the low financial capacity of the target groups, the government has designed the new four-year housing programme around an early saving scheme and income segregated target groups. It has introduced housing schemes with initial down-payment options (10, 20 or 40 per cent of the house value) that can be saved over a specific period of time (3, 7 and 5 years respectively) at the government-owned Commercial Bank of Ethiopia (CBE), who is also the mortgage provider for the remaining 90, 80 and 60 per cent. These 10/90, 20/80 & 40/60 schemes, introduced by the Addis Ababa City Council June 2013, target low to upper-middle income households.
Yeka Abado
Yeka Abado is a site of the Housing Development Programme that encompasses these schemes. It will soon deliver 18,000 flats of the 10/90, 20/80 and 40/60 schemes together with schools, health centres and green and commercial areas. The development extends over a 200 hectare green-field site 16km east of Meskel Square, Addis city centre. A Light Rail Transit (LRT) is planned to connect the development to the centre.

The Housing Development Programme, managed by the Addis Ababa City Council, provides the land, infrastructure, services and housing in the shape of condominiums, i.e. multi-storey buildings where communal areas are jointly owned. All flats are for sale and beneficiaries qualify for the purchase after opening a savings account at the CBE and registering for the scheme, which isn’t altogether an easy affair because demand vastly exceeds the supply, and it often happens that keen homeowners are left out. The lucky registrants aren’t really much better off since it can take several years for them to get the home they have registered for and during this waiting time other, generally much better, schemes get introduced. But so much to the to-be-improved part.
The figures on how many condominium units have already been transferred to end-users are difficult to track. According to a recent article published in Capital, 136,000 homes were transferred to beneficiaries in the past 10 years and 75,000 are expected to be handed over in 2015. The Addis Ababa Saving Housing Development Enterprise (AASHDE) is the entity responsible for distributing the houses which are transferred to their owners by way of a computer-based lottery system. There are no developers involved in the scheme, meaning, no uncontrolled profits going to private hands.
Financing
The infrastructure is understood to be financed with Addis Ababa City Council’s own resources whereas the condominiums are built with loans provided by the Commercial Bank of Ethiopia. According to the government, the previous housing scheme financing requirements attributed 85% of the cost estimate to building costs and 15% to supporting infrastructure.
The City Council gets part of its resources through the purchase of bonds issued by the Commercial Bank of Ethiopia, we were explained. At the Financing African Cities conference last December in Marrakesh, the Ethiopian Ministry of Urban Development, Housing and Construction explained how Addis gets the additional resources thus managing to be a self-financed city.
In 1975, a year after Emperor Haile Selassie was overthrown, the government nationalized all urban land “in an effort to force a fairer distribution of wealth across the country”, says UN Habitat. Some 20 years later the government delegated the responsibility of land development to local government authorities and the city of Addis found itself responsible for the value of its 54,000 hectares. It has since been urbanizing empty land and leasing it, not selling, to development. It has also changed the use of peripheral farm land to urban land to the same purpose. Through these leases plus land taxes, rents and service charges, the City authorities derive substantial revenues.

10/90 Scheme for Low Income Households
The Yeka Abado site, as said, includes the housing schemes 10/90, 20/80 and 40/60 that never mix in a block; each scheme has its own separate building. 20/80 and 40/60 buildings are set close to each other, 10/90 buildings are farther apart.
Flat size, qualities and construction costs per square meter vary depending on scheme.
The 10/90 scheme aims to provide homeownership to lower-income households with monthly income under 1,200 Birr (60 USD). This scheme offers only one house type: a studio flat of approximately 31sqm with separate kitchen and bathroom in G+1 and G+2 buildings (ground plus 1 or 2 floors). Each floor has 8 studios and they sell for 40,000 Birr (2,000 USD) each. The construction cost for such a studio is 67,000 Birr (3,300 USD, 106 USD/sqm) and the scheme is cross subsidized using other programmes.


The 10/90 scheme registrants provide 10% of the housing cost, i.e. 4,000 Birr (200 USD), over a saving period of 3 years with 187 Birr (9 USD) monthly payments to a savings account at the CBE. The remaining 90% is financed with a long term bank loan. During the saving period the potential buyers have to keep meeting their rental commitments, which in Addis easily amounts to half their income, and this makes the saving target a bit of a challenge.
This could explain why the interest in the 10/90 scheme is so low, with only 3% of the registrants choosing it. Another reason could be that for slightly higher payments, registrants can access a one bedroom flat of the next scheme.
20/80 Scheme
This scheme targets lower-middle and middle-middle income households who provide deposits of 20% of the housing cost, saved over 7 years, while the remaining 80% is provided with a long term bank loan. This scheme is in G+4, G+7 in G+12 buildings (ground + 4, 7 or 12 floors) and offers one, two and three bedroom flats.


The communal areas are nice. The corridors to the flats are bright and airy - since they are open to the outside - and the walls plastered and painted.
This scheme includes commercial spaces up to 10% for cross subsidy.


40/60 Scheme
The 40/60 scheme targets upper-middle income households, who over the course of 5 years are able to save 40% of the housing cost, before getting the 60% loan from the CBE. For this group savings will earn 5.5% interest over the 5 years and the loans will carry 7.5% interest, instead of the 9.5% market rate, to be paid in 17 years.
This scheme welcomes diaspora Ethiopians and encourages those with savings to pay the deposit upfront. 40/60 registrants have preference over other registrants, and more so if they can save in a shorter period than established.
The 40/60 one bedroom flats are 55sqm and cost 163,000 Birr (8,000 USD); the two bedroom units are 75m2 and cost 290,000 Birr (14,200 USD) and the three beds, 100sqm at 386,400 Birr (19,000 USD). The monthly saving payments are USD 51, 77 and 120 respectively.
This scheme has higher qualities than the previous two and includes commercial spaces up to 20% for cross subsidy.
Materials
If the financial plan is well thought, the construction efficiency is no less impressive. All the processes involved, from procurement to wastage reduction and design, have been carefully studied by the Ethiopian Institute of Architecture to bring construction costs down to a bare minimum. At the “Housing Market Dynamics” workshop the EIA shared their best practices for Yeka Abado:


Nearly everything is sourced in Ethiopia. Prior to the scheme there were three cement companies in the country, now there are ten. Steel factories have also been created. Window frames, initially supplied by Chinese contractors for 1,000 USD each, are now supplied by the government who felt they could produce them cheaper and has set up a factory that now provides window frames for other projects in Ethiopia.
Internal partitions are made with agrostone panels (picture below), a low-cost material made of fillers (agricultural waste like bagasse, which is available from sugar factories), binders (magnesium-based chemicals like magnesium oxychlorine cement - MOC) and reinforcement (fiberglass). Agrostone reduces the cost of partitions by 50%. There are two agrostone factories in Ethiopia.


As a wrap-up, a curiosity shared by the Ethiopian Institute of Architecture: it seems that people do not accept mud-bricks as “proper” materials and refuse to purchase homes built with them. They’d only accept a mud-brick home, if it were to be given for free.
Opportunities: stone crashers are undersupplied in Ethiopia and Addis’ mayor has said that “the city administration is considering to call in foreign investors to develop condominiums as well”, says Capital.
All together an impressive project with incredibly well coordinated efforts. It remains to be seen if the conditions don't change half way through the process and if the dwellers' expectations are fully met.