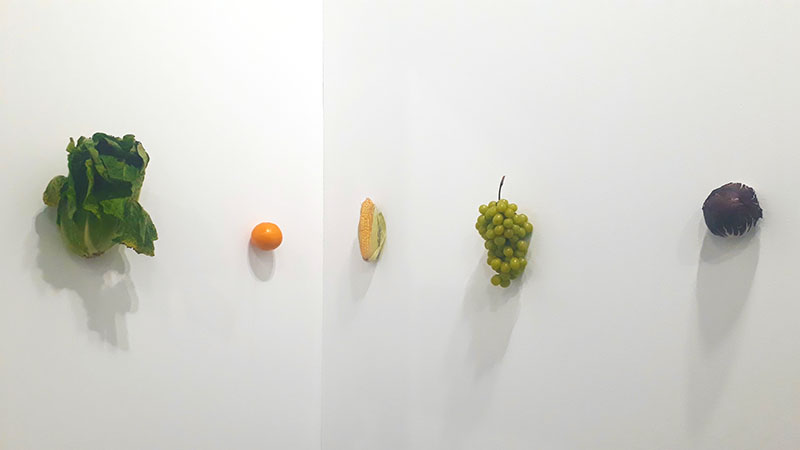 ARCO Madrid contemporary art fair celebrates in 2022 the 40th anniversary it couldn't celebrate last year –due to COVID restrictions– with 185 galleries from 30 countries and a specially curated programme to reflect on the past and future of the fair. This comes in addition to the regular sections for young galleries and Latin American art, and a general programme with 159 national and international galleries.

The General Programme has seen some fun this year with a few galleries featuring site-specific artworks that required visitors' engagement. The Berlin-based Neugerriemschneider gallery has presented two such artworks: Your Accountability of Presence, an installation by Olafur Eliasson that projects shadows of visitors in a wide spectrum of colours, and Falha by Brazilian artist Renata Lucas consisting of a folding floor with modular plywood panels that can be retracted. Eliasson's installation projects beautiful colours and shapes on the wall when there are people in the room but it interestingly shows no colours when the room is empty.

There were some extraordinary artworks in the General Programme including large-scale paintings by Martha Jungwirth (b. 1940) on Goya's notorious maja; a three-part painting by Antoni Tàpies (b. 1923) and a recent installation by Christian Boltanski (b. 1944) who died last year.

Photography has seen remarkable contributions this year with photos of Colombian performance artist Maria Teresa Hincapié (b. 1956) captured during her 8-hour performance at a Bogotá bookshop window in 1989; or of a peaceful coastal enclave by Michael Najjar (b. 1966) meant as a reflection on the drama of climate-induced rising sea levels. Other wonderful photos include the black and white aerial views of traces of the Golf War on the landscape by Sophie Ristehueber (b. 1949) and a photo of a massive sound sculpture by Nik Novak (b. 1981) on the use of sound as a weapon.

Submerged Forest, Rondônia, a photographic map by Richard Mosse (b. 1980) and part of his series Tristes Triptiques –named after Claude Lévi-Strauss's memoir with the same name– captures in a beautifully hued and light way the ecocide in the Brazilian Amazon. The drone-captured map shows land cleared for livestock feed crop cultivation (in turquoise in the picture below), forest flooding for hydropower projects (in dark blue) and forest die-back (in red).

Interesting 3D artworks include Iman Issa's (b. 1979) serene wall sculptures with incongruent texts –like the one accompanying Self portrait that reads: Self as Alenka Zupančič who recounted the joke: "There are no cannibals here. We ate the last one yesterday"; Pasta, a spaghetti sphere by Victor Esther G (b. 1976); and the simple and bold objects by Jimena Kato (b. 1979).

Bahamian artist Tavares Strachan (b. 1979) has exhibited a tondo that honours Kojo Tavalou Houénou, a 1920s prominent critic of the French colonialism in Africa, and is part of Strachan's work on finding invisible people of colour from history and reinserting them into a narrative. Sheila Hicks (b. 1934) has shown lovely wall-mounted textiles and Ángela de la Cruz (b. 1965), the London-based Turner Prize-nominee widely represented in the current ARCO edition, monochromatic deformed stretchers.

Among the 2D artworks stand Jessica Rankin's (b. 1971) embroidered painted landscapes and a glittering polyurethane on aluminium painting by the Brussel-based duo mentalKLINIK.

Opening, the curated programme for young galleries, has brought together 15 galleries from 10 countries. Highlights include the site-specific artwork by Rio de Janeiro artist Manoela Medeiros (b. 1991) who has applied her excavating practice to create two wall cut outs at the booth; Dritton Selmani's (b. 1987) use of plastic bags in Love Letters as a medium for writing deep reflections; and a series of patched sketches by fashion designer/artist Susan Cianciolo (b. 1969). Pristina-based Selmani views plastic bags not as disposable items but as ideal carriers of memorable reflections due to their ultra-long lifespan.

El País has commissioned this year Daily Menu(s), an installation by multimedia artist Concha Jerez (b. 1941) made with half a dozen tables arranged in a circle. Each table is set with tableware full of shards and a screen showing mediocre content. The artist reflects on random media consumerism but also on censorship in social media.

The commemorative section ARCO 40+1 partly happens around a space organised like a museum, with several tiny subspaces allocated to galleries that have somehow been central to the fair. Altogether 20 national and international galleries have contributed with artworks from the likes of Mario Merz and Mona Hatoum. The project description in paper made sense, yet the physical experience didn't quite match the script, at least for me. The gallery spaces were crammed, with exhibits hardly fitting in, and the artworks –although of great quality– felt randomly selected. In this context, Karin Sander's (b. l957) simple and uncluttered artwork made of fresh vegetables pointing at the passage of time (see cover picture), was doubly appreciated.

Lastly, superb short film presented by Daniel Canogar (b. 1964) at Forum –ARCO's space for talks and debates– on Dynamo, his installation for the Spanish Pavillion at the Expo Dubai 2020. The artwork is made of a continuous screen morphed into a giant intertwined loop and shows sensor-induced light compositions supported by matching sounds and ambient lighting. Canogar spoke about his fascination with the technological sublime and how the public's energy feeds Dynamo, his most significant artwork so far, he said.

ARCOMadrid 2023 will include the programme "Mediterranean: A Round Sea" by curator Marina Fokidis with artists and galleries from surrounding countries.