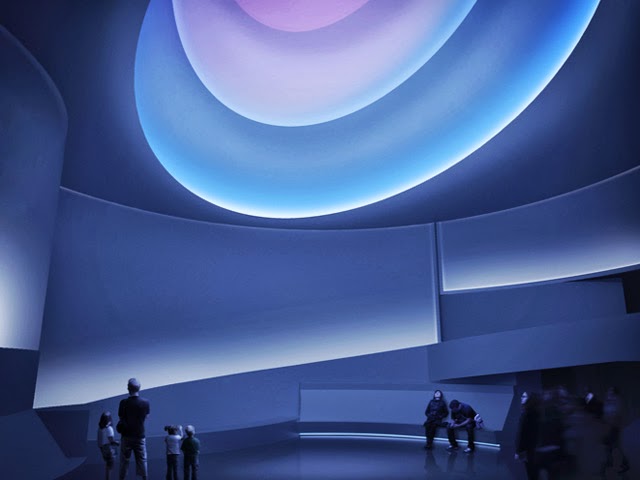 A new piece by James Turrell - the L.A.-born master of light and perception - reshapes the rotunda of Frank Lloyd Wright's Guggenheim. Aten Reign, the site-specific installation and the centre piece of the artist's solo show that opened on the summer solstice, modifies the daylight from the skylight with a series of concentric ellipses that glow in shifting colours.

Aten Reign is not quite a Skyspace, according to the artist, but a Skylight Space. Skyspaces are Turrell's notorious pavilions with smooth walls and an opening in the roof to contemplate the sky.

The Guggenheim's Skylight Space is a vast elliptical cone made with concentric bands of stretched fabric that increase in size towards the bottom and are lined with computer controlled LED lighting. The installation is experienced from below.

Aten Reign creates what Turrell describes as "an architecture of space created with light". In the words of Hilla Rebay, the Guggenheim's first director, "the work promotes a state of meditative contemplation [...], rekindling the museum's founding identity as a temple of spirit".

Reviews have been hard. Ariella Budick from the FT said: "the LED-powered procession of luscious colours has become a cliché of architectural décor [...]. It’s not Turrell’s fault that he pioneered such a successful medium; it’s always hard for an original to compete with knock-offs. But his art depends on fresh wizardry for its effect." Despite reviews, I thought the space was brilliant. 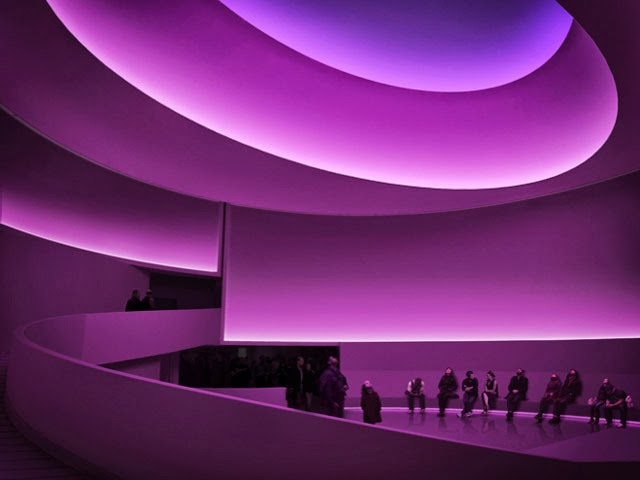