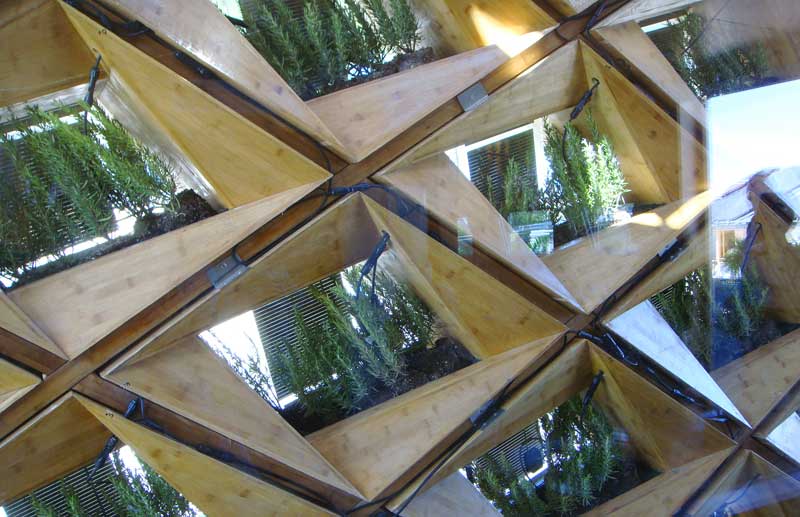 The renewable energy sector officially lives in a time warp. The second edition of the European Solar Decathlon, on show in Madrid, features 19 energy efficient houses that generate their own power. Disappointing though that they do so with superseded technologies. The competition, however, is a great initiative for raising awareness on the need to consume less natural resources and reduce waste generation, and the houses, designed by universities from around the globe, are a good example of efficient design.

What would I have expected? I guess to find examples of truly efficient electricity generation. Solar power is fine but we know it has a very low efficiency rate -10%- and there is a lack of facilities to store it, that's why it has to go hand in hand with the traditional power grid. Not really a breakthrough. I would have loved to see electricity being generated from electromagnetic radiation or via nano materials for instance. A type of energy that is easier to generate and can exist without the grid. There are plenty of institutes and independent researchers exploring the matter and achieving excellent results. Regarding new building materials, what about "atomic" ones such as graphene-based structures, metabolic materials or printed ones? Aren't these more XXI century than timber, paper or glass?

Back to the Villa Solar in Madrid where the Solar Decathlon competition is taking place, the 19 houses are being monitored and will get a score on 10 aspects, ranging from energy efficiency to innovation and functionality.

The Counter Entropy House from the RWTH Aachen is a project that stands out despite its conservative looks. It has an open floor plan enclosed by cores and a retractable glazing. The oversailing roof carries a curtain to the South and West edges. At the time of my visit the glazing was open and the curtain semi-closed and this created a lovely breeze and shade inside the house. The house is partly made with reused materials: the cladding panels are de-coated and melted CDs, the lamps are bicycle wheels wrapped with tracing paper and the furniture is made with cutouts from timber boards held together with a film. The house control panel, developed by one of the students, gets projected on a table surface. A sensor opposite the user recognizes the commands in the arm movements going towards the projected buttons. The system works with the user's arm movements not with the projection on the table, which has no other function than to help the user memorize the movements.

The Para Eco-House by the Chinese Tongji University is a small compact volume protected by an outer lattice skin. The house is mainly made with bamboo, uses vacuum insulated panels (VIP) for the walls and has a mist spray system in the terrace. Possibly its most interesting feature is the Western outer wall: a web of differently-sized openings filled with plants and solar cells.


ECO House by the Universitat Politecnica de Catalunya in Spain is a simple construction with great features. It is a lightweight structure clad with corrugated plastic. The rooms are independent timber cubes with exposed plugged-in services. The house uses different types of water: regular tap water, rain and on-site treated grey water. The user decides, depending on function, which one to use. The air cooling is equally interesting. Cold air is pumped from an outdoor, insulated box full with gravel. The box lid opens at night until the gravel cools down, then closes to preserve the low temperature. Sadly, the ventilation system seemed undersized since despite high ceilings and roof opening vents, the temperature in the house was uncomfortably high. Possibly the corrugated plastic skin wasn't helping. 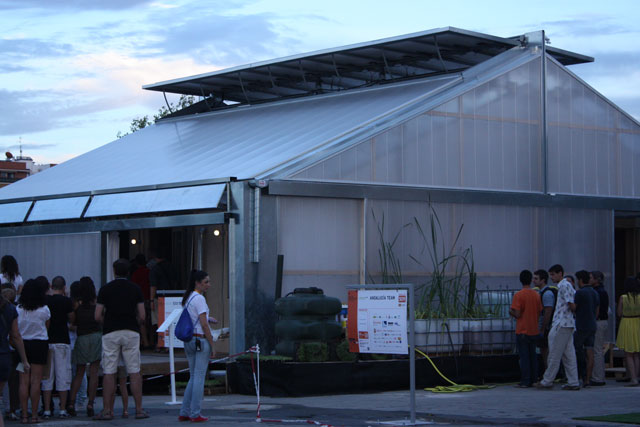 I got excited to see a rice paddy in front of the Omotenasi House by the Japanese Chiba University and assumed that it was irrigated with grey water but it wasn't. Still, a great idea to grow your own food at home. In this regard, the house has also cultivation screens and a plant factory that uses fiber optics for rapid plant growth. The traditional-looking roof is made with photovoltaic tiles and produces 1.7 times more electricity than a regular PV system. The dark panels in front of the house are for water heating. 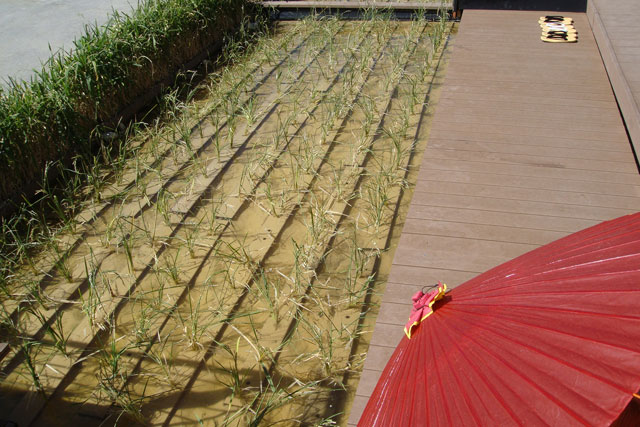 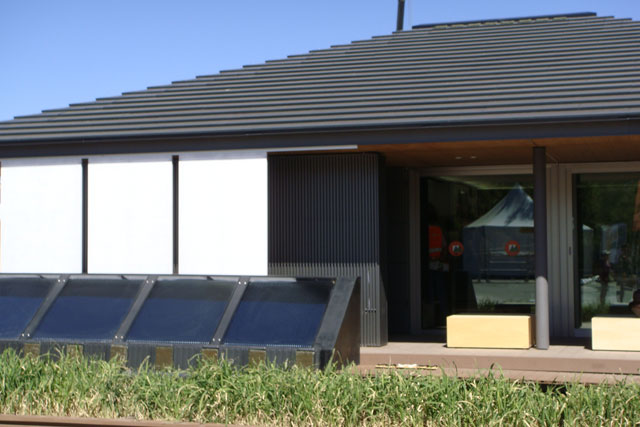 The Odoo House by the Budapest University of Technology and Economics has the most striking outdoor space. Allegedly based on Hungarian traditions, the East-West oriented open space is enclosed to the South by a "summer wall"  that includes an outdoor kitchen and a furniture storage that turns into a lounging area. The wall is clad with PV panels to its South face.

Other projects include the Canopea House from the Ecole National Supérieure d'Architecture de Grenoble, France. 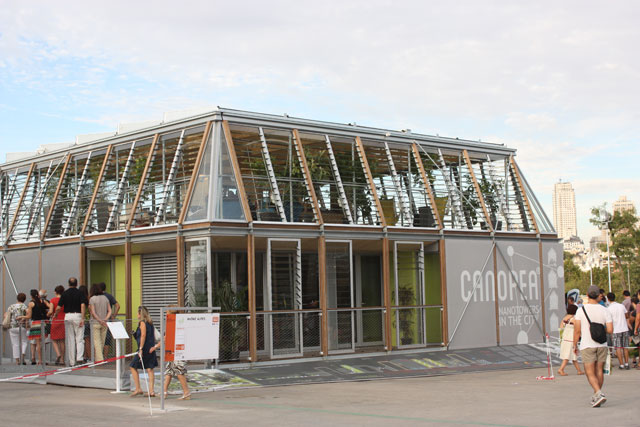 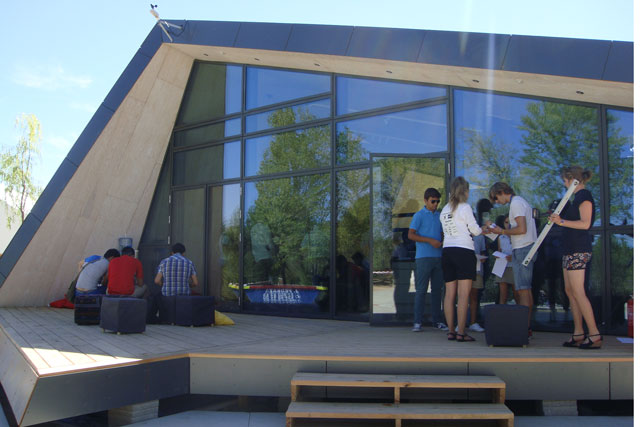 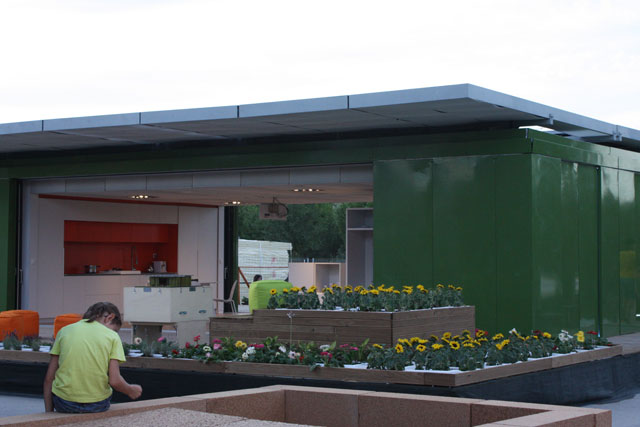 Check the following post Solar Decathlon Europe / Part 2 to learn about the winners. 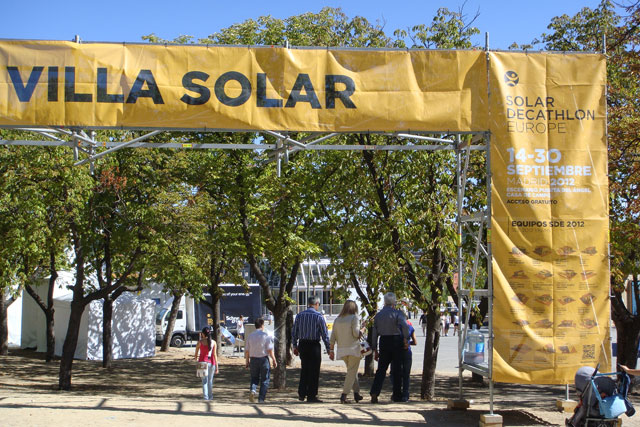