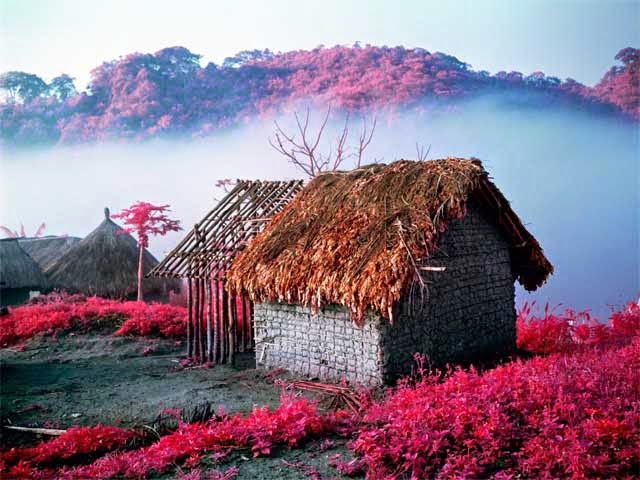 The 34th edition of ARCO Madrid Contemporary Art Fair happens at a time when I am designing a 2,000-dollar home prototype for a rural area in a developing country and reviewing any artwork that costs as much as several homes, feels rather odd. That said, I've enjoyed this year's edition, especially Richard Mosse's beautifully portrayed basic house structures in lush surroundings.

Richard Mosse's colour-infrared pictures of the Democratic Republic of Congo (DRC) are something I always look forward to in ARCO. The Ireland-born and New York-based photographer has been shooting landscapes, people and rebel soldiers in eastern DRC since 2011 using Kodak Aerochrome, a film developed in the 1940s for military surveillance. It reflects the infrared spectrum and renders green into pink.

There have been various iterations of Mosse's Congo project in previous editions of ARCO (see my 2013 and 2014 posts). No warlords or IDP camps pictures this year but a more subtle portrait of the Congo conflict. In his short film "The Impossible Image" Mosse explains the project in more detail.

ARCO's guest country this year is Colombia, who brings ten galleries and twenty artists with the ARCO Colombia programme and a vast display of Colombian art in all major Madrid museums organized by the Colombian government.

Worth a mention is JustMAD, Madrid's affordable art fair happening within the Madrid Art Week and in parallel to ARCO. This year's edition displays very interesting photography, including works from the Puerto Rican & South African duo Christto & Andrew who live and work in Qatar.