The Medina of Fez : Analysis of a Superb Compact Town 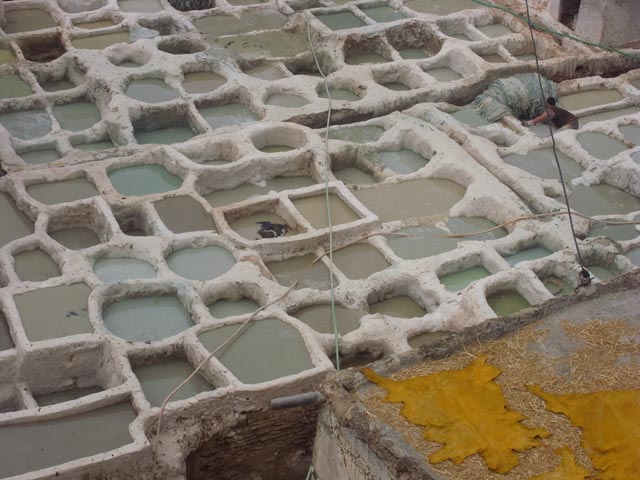 The old Medina of Fez in Morocco also called Fez el Bali is a pedestrian medieval town with small-scale buildings and twisting narrow streets. It is a compact and dense place, full with artisans and food stalls. In its 220 ha you can find markets, mosques, universities, schools, hospitals, private gardens and even industry (manufacturing). You can cross town by foot in about 40 minutes. And if urban density doesn't do for you, the countryside is right outside the city walls.

There are many aspects of Fez that impress you. The composure of its people is one of them. Paul Bowles, who seems to share opinion, has an interesting view on it:


"Fez is a relatively relaxed city; there is time for everything. The retention of this classic sense of time can be attributed, in part at least, to the absence of motor vehicles in the medina. If you live in a city where you never have to run in order to catch something, or jump to avoid being hit by it, you are likely to have preserved a natural physical dignity which is not a concomitant of contemporary life; and if you still have that dignity, you want to go on having it. So you see to it that you have time to do whatever you want to do; it is vulgar to hurry."

The absence of cars is partly a result of how the city is structured. In Fez, primary activities, i.e. "live, work and leisure", are all mixed, meaning that you live in the proximity of your work and of your social activities. This reduces the travel distances greatly, making the use of a car unnecessary. Mixed-use results as well in a lively city, constantly in use and rich in social interaction.

A COMPACT TOWN  REDUCES TRAVEL AND INCREASES SOCIAL INTERACTION
Leisure
Fez is a city with a dense building fabric. Its streets are narrow (between 0.5m and 5m) and buildings (single-story to 4-story) cover a vast amount of its surface (100% of the total surface is developed). Although there is only one large public square there are plenty of small improvised squares created in the residual space of the irregular urban grid. Most of the socializing happens in the streets and in other public spaces such as the mosque, the hammam and the marketplace.


STREETS DUAL PURPOSE: SOCIAL INTERACTION AND MOVEMENT
Work
There are allegedly 30,000 artisans in the Medina: Potters and ceramists (zelliges), tanners, copper- and brass-blacksmiths, woodcarvers, embroiders, weapon-makers, weavers... Each guild occupies its own district and has its dedicated market (souq). There is the carpenters' souq and the henna souq; the perfumers' and the shoemakers' souq.

Artisans have small workshops, roughly 2x3m, open to the street. These shops are generally full of stock and equipment.  It is therefore not unusual for artisans to work on the streets, adding interest to your journey. Freight is delivered by donkey or handcart.


LOCALLY PRODUCED AND CONSUMED GOODS REDUCE FREIGHT TRANSPORT
The district of the tanners is quite impressive and worth a description. The Chouara Tannery is the largest in Fez. It is a vast urban hole filled up with vats. The tannery processes manually the skins of sheep and goats and turns them into leather. The skins get prepared for tanning by being immersed in liquid lime and treated with a mixture of pigeon poo and cow urine. They are then soaked by hand in coloured pits for dying and laid atop the rooftops to dry.

It is fascinating to see how an activity that is considered noxious, and has traditionally been relegated outside the city walls, is today a major point of attraction. The unusual structure of the place, the spectacular colours of the liquids and the singularity of the business make a visit to the tanneries worthwhile, notwithstanding the pungent smell. The tanneries are still one of the most important sources of income and trade for the city. 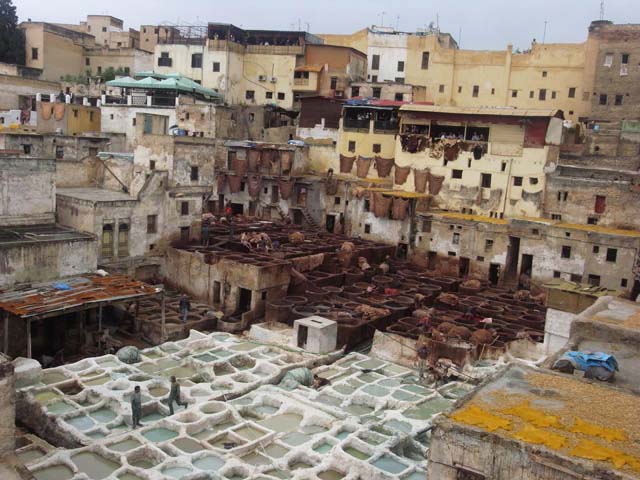 The houses in Fez are conceived around a courtyard. Some courtyards are bigger, nicer and greener than others but the arrangement is similar for all houses. The street facade is a high naked wall with a door more or less ornamented and some grated openings (if at all) somewhere along its height. The inside by contrast is rich and sensuous. I could impossibly come up with a better description than Paul Bowles' so here is what he says:


"When you step into the glittering tile and marble interior of a prosperous Fez dwelling, with its orange trees and its fountains, and the combined pastel and hard-candy colors glowing from the rooms around the courtyard, you are pleased that there should be nothing but the indifferent anonymity of a blank wall outside - nothing to indicate the existence of this very private, remote and brilliant world within. A noncommittal expanse of earthen wall in the street hides a little Alhambra of one's own.  A miniature paradise totally shielded from the gaze of the world."

Prospect
In spite of its many sustainable attributes, Fez el Bali has had serious urban issues in the past years. When the UNESCO listed the old Medina a world heritage site in 1981, it also stretched that it was threatened with collapse due to overpopulation and neglect. Sylvio Mutal, an urban specialist with UNDP describes the situation:


"Ironically, the city's problems may in part be a result of its past success. The ancient city was not abandoned. Far from that, it remains an essential center of production; some two-thirds of the inhabitants of the metropolis live there. Rather, what happened could be seen as the over-activation of the center of a fragile city that, in many ways, remains an exemplary model. [...] The result is that pressures mounted with which the city could not cope, to the point that precious architectural ensembles became dilapidated, the ecological balance broke down and water supply systems became saturated, and the city's traditional craft industries were threatened."


A plan for a complete rehabilitation of the Medina was submitted after a five years' study by Morocco and UNESCO and 1989 the ADER-Fes (Agence pour la Dedensification et la Rehabilitation de la Medina de Fes) was created. It is a semi-private organization responsible for carrying out and co-ordinating the rehabilitation programme. The estimated total cost of the rehabilitation was around $600 million. Initial funds came from the Moroccan government and UNESCO, then 1993 the World Bank granted a loan.

The "Rehabilitation Project for the Fez Medina" included upgrading dwellings, restoring historic buildings, providing incentives for commercial activities, improving infrastructures and creating an emergency circulation network. Already completed, it is considered to be an exemplary rehabilitation project not only because of the town improvements and the boost to the local economy but also because it has proven that private funds can have their returns investing in heritage.

The Millenium Challenge Corporation does know a lot on this. It is a US foreign aid agency that provides developing countries with grants to fund country-led solutions for reducing poverty. The MCC analyzes the likely impact on economic growth of its programmes by the use of an Economic Rate of Return Analysis (ERR). They analyze proposals as investments, with payoffs going to households and firms in partner countries. They seek proposals with high ERR and broad impact i.e. high poverty reduction.

2007 the MCC granted $111 million for the "Artisan and Fez Medina Project" with the aim to stimulate economic growth and reduce poverty among artisans. In the framework of this project, the MCC issued via the "Agency of Partnership for Progress" (APP) an international architectural competition to redesign the area around Place Lalla Yeddouna, key area along the Medina's tourist circuit. The prize was awarded March 2011 and project is due to completion in 2013.

The MCC model expects the project to have an economic rate return of approx 21% over 15 years. Profits will be generated by the businesses on the site, by additional spending of tourists and by transferring large portions of the renovated site to the private sector through sale or long-term lease.

These ERR numbers are estimates and it remains to be seen what the real return will be. However, certain thing is that the Fez Medina remains through the years an attractive place to live and visit, trade and invest. And I dare to attribute it surely to its beauty and people but also to its density, size, mixed activities, absence of cars and cultural heritage... a killer combination very few cities can be proud of having. 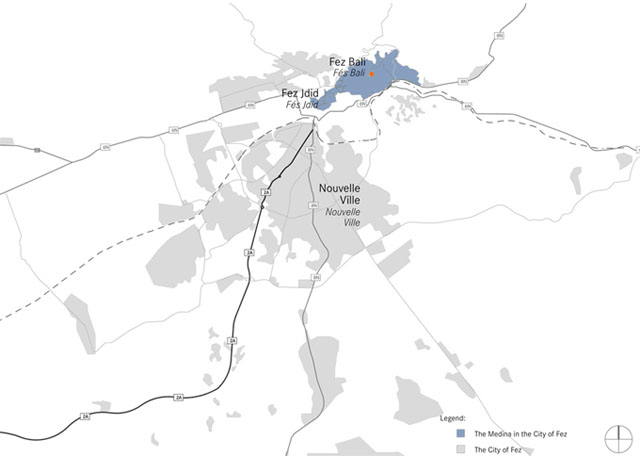 Sources
"Fez" by Paul Bowles / 1984
"Fez: Preserving a City" by Josh Martin / 1993
"Medieval Urbanism in Morocco: Lessons for the Modern World" by Randy Ghent
"Morocco: Artisan and Fez Medina" by the MCC
Place Lalla Yeddouna International Competion
"The Medina of Fez" by UNESCO
"The Medina of Fez - Crafting a Future for the Past" by Genevieve Darles, Nicolas Lagrange / 1996
"The Morrocan Medina" by JH Crawford / estimated 2002
"The Rehabilitation of the Fez Medina" by the World Bank / 1999
"Traditional Building Techniques in Fes" by Alessandra Grillo / 1988
"Urban Conservation of Fez-Medina: a Post-Impact Appraisal" by Hassan Radoine / 2008

Pictures
without caption by PS and VB