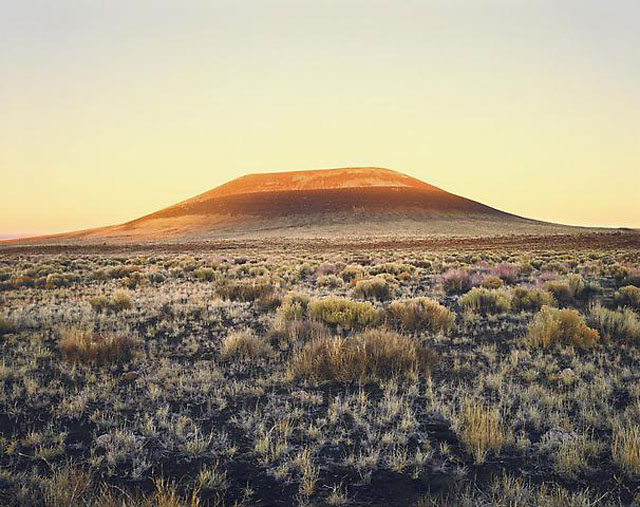 The recent show at the Gagosian has been a wonderful opportunity to experience Turrell's latest on light/ colour/ space and to keep up with the Roden Crater project.

James Turrell's has been exploring the possibilities of using light as a medium of perception for the past 45 years. The Roden Crater project, possibly his largest artwork, is designed to make the viewer feel the physicality of light. Since the 70s Turrell has been creating tunnels and chambers in this dead volcano crater in the Arizona desert and aligning them with celestial events such as lunar cycles and solstices. The experience will be unique, with no 2 visitors experiencing the same condition.  This "naked-eye observatory" is a work in progress and no date for a public opening has been set yet. The project was represented in the exhibition by pictures and 2 bronze and plaster models.

Allegedly the most interesting part of the exhibition was a white-painted metal sphere called Bindu Shard to be experienced by one person at the time. During the 15-minute optical voyage the visitor is bombarded with high-speed flashing to trigger a phenomenon called the Purkinje effect. "This is the secret of the bindi spot," Turrell says, "the spot you see when you close your eyes and meditate. The colour is only in your mind, there is no thing' in there, you are only dealing with light and space, and that triggers perception". Sadly the capsule sessions were fully booked and this makes me another disappointed visitor who missed the acid-trip-like experience.

Still, plenty to experience. Dhatu is a white room where light is projected into space, creating a formless landscape without horizons. The experience is similar to skiing in whiteout conditions.


"Through light, space can be formed without physical material like concrete or steel. We can actually stop the penetration of vision with where light is and where it isn't. Like the atmosphere, we can't see through it to the stars that are there during the day. But as soon as that light is dimmed around the self, then this penetration of vision goes out. So I'm very interested in this feeling, using the eyes to penetrate the space."  James Turrell

I've been fascinated by James Turrell's work since I saw the pictures of his light installations at the Mondrian Hotel in LA. It was time ago, in 1997, and it was the first time I saw light being used to change the perception of space rather than to illuminate it. It took me a couple of years to finally be in one of his spaces. The chance came on 2000 with Night Rain, a walk-in light sculpture for the Millenium Dome's Faith Zone and later on 2006 with the exhibition A Life in Light at the Louise Blouin Foundation in London. Both were simple experiences with no message but with a huge effect on your mind.

One of Turrell's most interesting experiments are the Skyspaces: generally circular white-walled rooms with a bench around the circumference and a hole on the roof. You sit or lay and contemplate the sky but the experience is more sublime than what it sounds, since he carefully balances the interior and exterior light altering this way your perception of the space and the sky which seems to be within reach.  Turrell has created a few Skyspaces in Britain including in Kielder Forest in Northumberland, at the Yorkshire Sculpture Park and at Houghton Hall in Norfolk. He also created a temporary one in Penzance, Cornwall, called Elliptic Ecliptic to view the solar eclipse on 11 August 1999.