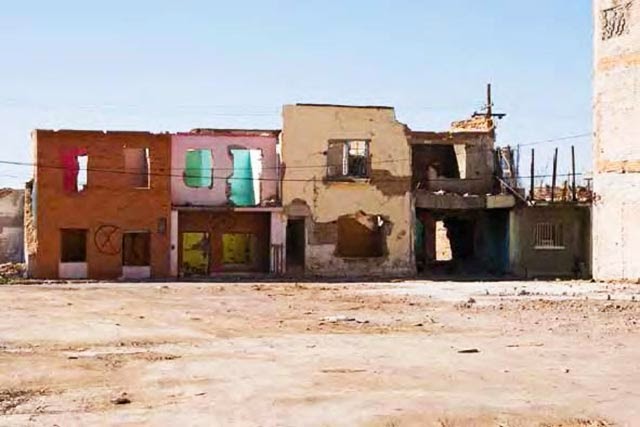 What do you do when 115,000 homes are left behind? Mexican artist Teresa Margollés explores the phenomenon of Ciudad Juárez, the border city that saw 220,000 residents displaced by violence in 2010.

El Testigo / The witness, Teresa Margollés' solo exhibition at the CA2M in Madrid, starts with a room full of covers of a Ciudad de Juárez tabloid. The work, called PM 2010 (2012), shows all the covers of 2010, a year said to be one of the most violent ones. As a matter of fact, there isn't a single cover in that room that doesn't picture an act of brutal violence.

The second room, a corridor, has a sound installation called the Sounds of Death. You arrive to the third room very well picturing the place issues.

This Property Won't Be Demolished is a colour series of 30 photographs of empty buildings taken between 2009 and 2013 in Ciudad Juárez. You've previously understood the reason for the population displacement, now you see the result of it. But Margollés takes it further in the next room by making you feeling it. The Promise is a wall made with 22 tons of rubble from a Juárez house. The public is encouraged to undo the wall with the hands, bringing it back to rubble.

The artwork comes with a picture archive and a video with the making-of: an abandoned house in south-east Ciudad Juárez is purchased, carefully demolished, grounded, packed and sent away.

It is very powerful to have a reconstituted wall in front of you and be able to touch and demolish it. You connect to the story with the senses rather than with the mind. Apparently feeling an issue rather than understanding it, is what takes to care about it.

Besides the power of presence, the other aspect Margollés brings over is about the essence of a town. It becomes clear in the show that it's neither the buildings nor the people what makes a city successful, but rather the social contract between these people. The willingness of a community to sacrifice some personal liberties in favour of a common good.

So what do you do when 115,000 homes are left behind? You try to put an end to what has triggered the displacement in the first place.

Further reading about Teresa Margollés in the article ARCOMadrid 2013

Pictures
by AM unless otherwise stated. Cover pictures This Property Won't Be Demolished by Teresa Margollés