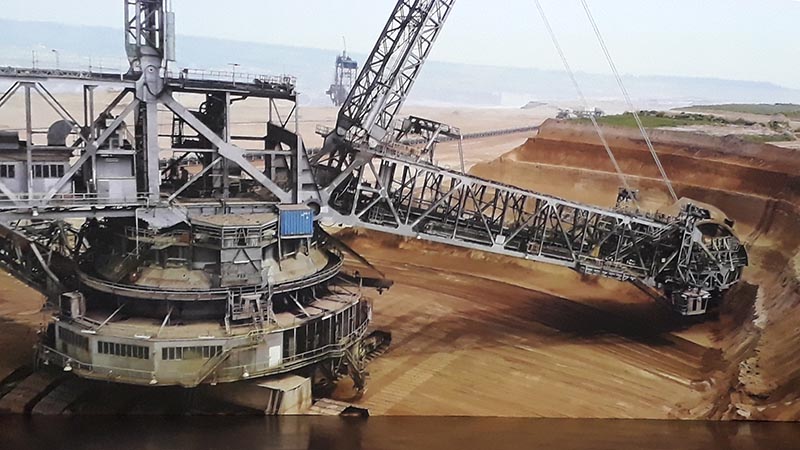 Slow Violence, the audiovisual installation by French artist Joanie Lemercier, exposes the impact of technology and energy consumption at a solo exhibition in Madrid.

The installation shows a giant bucket-wheel excavator scooping up earth from a plateau - pictured above. The machine is impressive and we read that it is a Bagger 293, the world's largest machine able to scoop 240,000 m3 of soil per day. The scene is at the Hambach open-pit coal mine close to Cologne, Germany, and the excavator is destroying the last remains of the 12,000-year-old Hambach forest to access the lignite deposits beneath. Operated by energy giant RWE, the 85 km2 mine extracts 40 million tonnes of lignite yearly for electricity generation in North Rhine-Westphalia, and emits 100 million tonnes of CO2 per year.

Lemercier has traveled to the mine to film several aspects related to its exploitation: the activism supporting its closure; the destruction of the community; and the beauty of the remaining forest. He has called the artwork The Hambach Project and the Technological Sublime (2019-21), and has structured it in four audiovisual installations, one of which is Slow Violence.

This is Lemercier's first large exhibition and displays fifteen years of practice with seven installations.